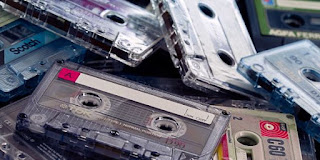 Like every sane person in the Western world, I've ditched the video tapes. I used to have hundreds, now I've got less than a dozen. All I've got less is a few blank tapes that still have home movies and other weird shit that I desperately need to digitise; and two proper tapes - one is the Jean Rollin film Fascination that was the last gift I got from my first girlfriend, and the other is the copy of Dawn of the Dead I bought with my 16th birthday money. I'm never giving those up because I'm a sentimental old shit.

But I've still got loads and loads of cassette tapes, full of music that was laid down years and years ago. There are mix tapes of Beatles tunes my mate Chris made for me in the nineties, and the copy of The Cure's Mixed Up album that my mum got me for some good exam results, and more Queen and Iron Maiden albums than anybody would ever really need.

I got rid of a few of them over the years, and some of the tapes self-destructed or were left out in the sun, but I've still got a heap of them, and they still all work, when CDs and records have been scratched to hell. And I gleefully get them out whenever get the chance, although I'm now actively looking for a cheap cassette player that I can blast some of this shit on. The quality doesn't matter, if you crank it loud enough.

It's easier to hold onto the cassettes than the videos, they a lot smaller and pack a lot of punch on their thin strips. And I just need to find that goddamn player so I can crank up those old mix tapes. It's great music from great times, and it's still there, waiting to be played.
Posted by Bob Temuka at 5:14 PM