Why doesn't everybody read Dork? 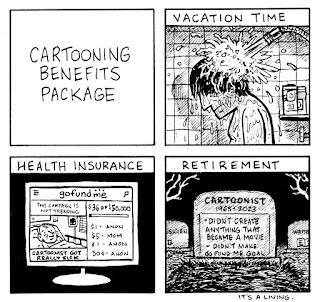 Evan Dorkin is always unflinchingly honest about how rough it can be to be a comic creator in this fucked-up industry, and I'm completely baffled why he has to scrape together projects to pay his fucking bills, instead of getting all the money in the world. His comics are so funny and so full of life, it's inconceivable to me that publishers have lost money on recent collected editions. What is wrong with everyone?

Dorkin's comics are consistently excellent - mainstream things like World's Finest, Bill & Ted and Beasts of Burden are remorselessly entertaining, and his Milk and Cheese, Eltingville Club and various Dork comics have an absolute free-wheeling and razor-sharp nature that ensures his cartoons are seething with vitality. Some of them are so deeply personal it hurts to read them, and they all offer substantial rewards, in their own ways.

This should be enough to make Dorkin a comic legend, but he's still somewhere on the margins of the culture. He might be happiest there, but it would be nice if his massive body of great comics paid a living wage.

Maybe he never got the hardcore nerds on board because so much of the funny cuts so close to the bone, you can see the marow. Nerds hate themselves as much as anyone, but they don't need a smartarse to rub their faces in it.

Maybe it's just because people are fucking stupid.

I have a pathological aversion to owning comic books in multiple forms, if I upsize to a trade or hardback or other collection, I get rid of the individual issues I had first. But I have multiple versions of Dork and Milk and Cheese, and I gladly snapped up recent hardbacks. You should too. Everybody should.