Vivat Grendel: No happy ever after here 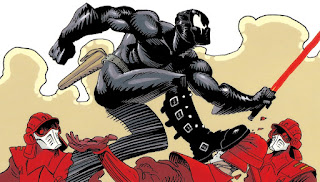 The Grendel story is one of much death and tragedy, but the closest it ever comes to an outright happy ending is at the end of War Child, as the true Grendel heir Jupiter Niklos Assante takes his birthright, and ushers in a new age of power and respect.

But the devil hates happy ever after, and in a timeline published very soon after War Child wrapped up, it reveals the new emperor's reign only lasts 15 years before he his assassinated, and his entire empire crumbles in a century, in the hands of lesser descendants..

In Grendel's world, you have to appreciate the moments of triumph as they happen, because they never last long, before everything burns down again.
Posted by Bob Temuka at 1:40 PM