Vivat Grendel: Dead from the dawn 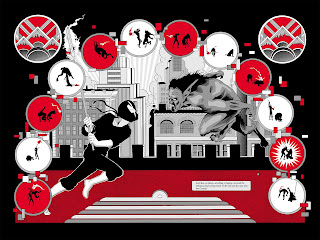 Hunter Rose was always the purest embodiment of Matt Wagner's Grendel concept - a creature of crisp style and cold calculation, a man who can strip you apart with his tongue as easily as his electrified fork, and a monster of formidable and indomitable will.

Rose was a gorgeous flower with the sharpest of thorns, and his story was over before the Grendel comic book saga ever really got going. After a brief and permanently unfinished adventure in his own black and white comic in the early eighties, Rose's story was next told in the Devil By The Deed story, a flowery biography of the character's life by an in-story author who would soon take the mask for herself, and ends with the ultimate and original Grendel lying dead on a New York rooftop.

Wagner's story would go to some weird and wonderful places over the next few years, into harsh experimentation with the comic form and forward into a sci-fi future of uncommonly grim detail, but Rose was gone before it really began.

But his shadow and legacy hovers over all, and the spirit of the mad fencer with the devil eyes would end up influencing the entire world, to dramatic and willful effect. Rose's ghost is there as Grendel Prime tries to carve it out of the earth, his skull echoes with his spiteful laughter, and his memory is never dying throughout the world.

And even after taking the concept to the far future, Wagner keeps coming back to Hunter Rose and always has more stories to tell about him. Because while Rose's story was always cut painfully short, the real devil is in the details.
Posted by Bob Temuka at 12:04 PM