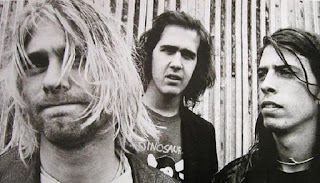 There's a nine-year age gap between myself and the lovely wife, and it's not that bad most of the time. We generally like the same movies and TV shows and music, which makes life so much easier. But sometimes, the gap feels like forever, and never more so when we're talking about Nirvana.

Me and my mates were all in our late teens when Nirvana exploded everywhere, so we were primed for those screeching guitars, primal screams and achingly delicate melodies that the band bought with them. They made all the hair metal bands and pop wannabes look like a joke, and were infinitely accessible to anyone who felt like an outcast (i.e. every young person in the world).

I wish I could claim that I was the first of my friends to get into it, but it was Anthony who heard them first, with Smells like Teen Spirit cranking out late at night on a rock radio station we could only just pick up from Christchurch. He was raving about them for weeks before any of us got a copy of their tape, and then we all pretended we had heard of them first.

Everybody lied about being into them since the Bleach days, everybody hated Pat Smear's smug grin on the Unplugged set, and everybody was fucking shattered when Kurt died. It was a universal.

The wife doesn't get that. She likes Nirvana in the same way she likes Led Zeppelin, or the Ramones, or The Beatles - as a band that was before her time. She doesn't understand, and quite right, too. Every musical generation is about nine years long, and she has her own thing. My generation will still be here, thrashing Nirvana till we die.
Posted by Bob Temuka at 10:24 AM