The ABC Warriors were spreading the word first 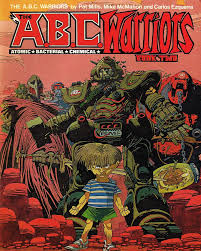 The very first proper comic book collection I ever saw for sale in a shop was one of the Titan reprints of the ABC Warriors from 2000ad. I saw it in the gaming section of a department store in Dunedin that hasn't existed in 30 years, sandwiched between a surprising amount of first and second generation Dungeons and Dragons modules.

There had always been collections of things like the Asterix and Tintin comics and there were a lot of cheap and cheerful local reprints of all sorts of horror and superhero comics. But almost every regular comic I read was in the single issue format, with just a few pages beneath a flimsy cover.

But this was a bound collection of classic 2000ad by Mills, McMahon and Ezquerra with an eye-wateringly gorgeous McMahon cover, and it was the most beautiful thing I'd ever seen (especially because it would take years to fill out the 2000ad collection and actually read these stories).

I didn't buy it, because I was 11, and it cost $30 in mid-1980s money, so I might as well have been asking for the moon, and it was gone the next time I visited the city again. I still went back to that department store several times before it closed down, hoping for another hit like that, but it was just all D&D again.

I have so many collected editions now - and a fair few of the Titan reprints - but I never got that ABC Warriors book. It's a prefect ideal of what comic books could (and would) be, and back in 1986, it was the sexiest thing I'd ever seen.
Posted by Bob Temuka at 12:30 PM