Vivat Grendel: Black and White and Red all over 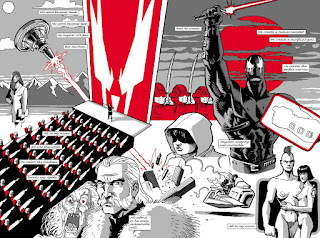 After the future faded away, Matt Wagner inevitably went back to Hunter Rose. The original Grendel was dead before the dawn of the saga, but there were still plenty of stories to tell about the murderous rascal, mostly in stark black, white and red.

Rose featured in dozens of little vignettes, and even took on a Shadow or two. The Grendel story all came full circle in the Behold The Devil, where Hunter Rose has a vision of the future he will inspire, and the massive, sprawling and twisted legacy he leaves behind.

Hilariously, he rejects it all, because it makes him less unique, but Hunter shouldn't have been too bothered, he'll always been one of a kind, no matter how many legions who follow in his wake.

There hasn't been much Grendel since then - Wagner has been busy on licensed properties and Mage in the years since. But he's finished up his other long-running story in recent months, with Kevin Matchstick finally figuring out what's really important in life, and it could be time to take another walk on the dark side.

After all, the devil never goes out of style.