Vivat Grendel: Art you can cut your eyes on 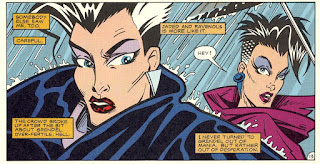 After the death of Hunter Rose, Matt Wagner could have let the Grendel concept lie down and rest, but then it came back as a thoroughly modern affair, with a kickass female pulling on the mask, and the sharpest art in contemporary comics.

Wagner gave up the artistic duties after his first round and has only occasionally returned to fully illustrate his own Grendel stories over the years, and his first real collaborators on the title were Arnold and Jacob Pander,who made sure the comic didn't look like anything else on the stands. Their art is as well-honed as Christine Spar's haircut, all tight angles and jagged panels, with goofy wide eyes only making things more sharp. The colors in the original comics - unfortunately recoloured for other editions - are gorgeously garish and are none more 80s.

The Pander Brothers were there for a year, but pointed the way to a sharp future, with similar jagged edges in the work of follow-up artists Bernie Mireault and John K. Snyder III, and even Wagner's own Grendel art had a similar sharpness (although this might have been due to the heavy Kurtzman influence he was on the time.)

That's how Grendel grew, with individual creators all adding something to Wagner's mix, and influencing the overall taste. And the Pander Brothers' work tastes like razor blades.
Posted by Bob Temuka at 12:28 PM