Vivat Grendel: Batman has something you don't 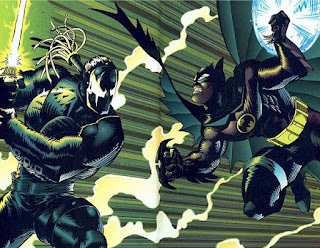 The second face-off between Grendel and Batman isn't as intricate or detailed as the first, swapping plot complexity for thudding, propulsive action. Batman is still engaged in an ideological battle with a cold, implacable foe, but there's a lot more guns and motorcycle chases in the sequel.

And it's a physical battle Batman just can't win - he has just as much iron will and grim determination as any devil, but the Grendel Prime is an unstoppable solar-powered cyborg from the far future who can't be stopped, even if you get his brain into a jar.

But Batman has something no Grendel ever had: a sense of hope for the future, and it's that bright beacon that undoes Prime at the end, with ultimate sidekick Robin making the crucial shot at the crucial time. Something Grendel could never calculate on is the unwavering aim of innocent righteousness, and he is undone.

There is a limit to unstoppable will, if there's nothing human at the heart of it.
Posted by Bob Temuka at 1:50 PM