What's Stan got to do with it? 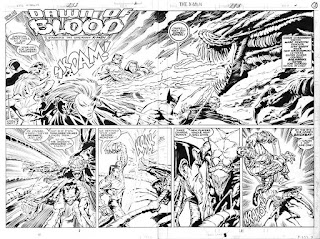 The first time I ever really noticed how weird it was to have 'Stan Lee Presents' above the title of every single Marvel comic was when it was up there on the title page of Uncanny X-Men #233. It's the second part of a Brood storyline which is notable for being extremely bloody - people are constantly getting gutted and broken, with the X-Men team using the final sanction to stop an alien infiltration.

It just seemed weird to have Stan's name up there, when it's such not a Stan story. There is no simple moralising with pleasant fisticuffs - this is dark as hell, with innocent people impregnated with alien eggs that take over their soul.

I was only 12 years old when this came out, but that was old enough to finally figure out Stan was just a figurehead. He still zapped out the odd Soapbox screed, but he probably hadn't even read the comics that came out under his name, and the man behind the curtain had fucked off to Hollywood to sell his vision on the big screen.

Stan got the last laugh, those movie dreams improbably paid off into a multi-billion dollar franchise, and becoming a household name with those endless cameos. His most successful creation was always 'Stan Lee', and he probably didn't even know who the Brood were.
Posted by Bob Temuka at 10:37 AM