Second time around: Spider solitaire - you have to cheat to win 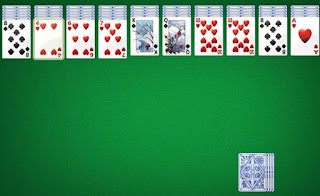 For the past decade or so, I've become straight up addicted to Spider Solitaire several times. It's the only computer game I ever keep coming back to, even after I've conquered it.

I think I've got the hang of it now, I have a perfect 100 percent solve record with all four suits on the current stats, with a couple of hundreds wins in a row. But it's still fucking hard, and a decent bloody challenge - it can take me more than two hours to crack a hand.

And the lovely wife is deeply unimpressed by it all. Not just because it's such an incredible waste of time, but because she thinks I cheat because I make prodigious use of the undo button.

I try to explain that it's like a maze, and there is a path to completing a dealt hand. There is just so much randomness in the cards and zero room for error, and the odds of choosing all the right cards to put on each other is truly astronomical. You have to go back and forth, like a Choose Your Own Adventure, trying out different combinations, but she's having none of it, she just thinks I'm cheating.

It's not that kind of game, but it's the kind of game that I can't stop playing. There is always a path to victory, even if it gets fuckin' frustrating finding it.

Originally posted on the Tearoom of Despair on October 24, 2018. This pathetic attempt to justify spending vast amounts of hours trying to beat spider solitaire is easily the most read thing on this blog from the past few years. I'm stuck in a bit of another hole with this goddamn game right now, so it didn't help much.