Second time around: Lone Wolf and Cub - Lost on that white path 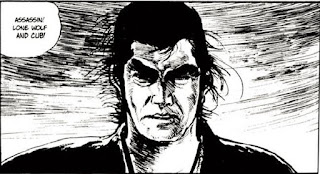 When I watch too much Curb Your Enthusiasm in one go, I have the unfortunate tendency to turn into the TV show's version of Larry David - a selfish prick who just can't let anything go. More than a couple of episodes a week, and I find myself giving people the David stare, or getting into petty arguments about the absolutely dumbest shit.

In a similar vein, I'm currently on a quest to finally read all of Lone Wolf and Cub, the majestic 9000-page epic by Koike and Kojima, and it's very slowly turning me into Ogami Ittō.

I read the editions put out by First Comics in the 80s a lot, but never really went beyond those 40-something issues, even though that was just a tiny fraction of the overall work. But now I've been going through the omnibus editions in one go and getting deeply into it. It's not as repetitive as it first appears, stories are consistently clever and intriguing, even as the ongoing saga of Itto and Daigorō's war against the Yagyū clan crawls ever forward, and it's always beautiful and exciting to look at.

And even though Itto is an enigma, walking a philosophical path that I just cannot follow, and even though I'm currently just over a quarter of the way through the whole story, I can't help but pick up on his honour and sense of duty and single-mindedness. I can avoid the inevitable self-destruction - and there is no way in the seven hells I am ever going to treat my child the way he treats his - but when confronted by the everyday challenges of normal life, my brain keeps falling back to 'What would Itto do?'.

I'm not any good at projecting a death aura, and if I picked up a samurai sword I'd probably end up impaling myself before dispatching some dastardly ninjas. But there are worse examples of dealing with life than this assassin's way.

Orginally posted on the Tearoom of Despair on November 18, 2019. I read this entire epic in the first delirious months of parenthood, and have struggled to find anything to match it in these early days of Number Two. What could possibly match Lone Wolf and Cub?