Second time around: On the Liberator with the mutoids, falling through the universe 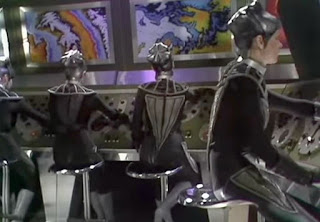 I don't know how old I was, but the second oldest dream I ever having can remember having definitely took place after I saw Blake's 7 for the first time. Because I'm on the Liberator, the spaceship from the TV show, but it's broken somehow, and we're falling through the universe, as if there is gravity out there in the nothing. And the spaceship is creaking and moaning and we're all doomed as we fall through forever, because we don't have Blake, or Avon, or even Villa to save us. They've all been replaced by mutoids.

The mutoids were shocktroopers used by the Federation, the ultimate villain in the British '70s series. Under the Federation, all dissent is crushed - the series starts with the title character getting framed as a child abuser - and they maintain their fierce grip on this corner of the galaxy with legions of troopers and more specialized mutoids. They're people who have had their minds wiped and gone through some kind of physical modification, (made only creepier by the vagueness of that process) turning into robotic and emotionless science vampires, dependent on a blood serum to function. They pilot the spaceships used their laser guns to gun down anybody their superior orders them to, and had these fucking weird gooey headpieces.

And apart from a few early appearances, the Mutoids are entirely female, which was never really explained, except as a shortcut for showing the unthinking misogyny of a fascist space empire - any women who speak out against the system have their personalities erased, and their bodies turned into brute force cannon fodder for the war machine.

As a kid, I wasn't really that familiar with the deeper implications and metaphors for a patriarchal privilege that the story implied, all I knew is that those blank eyed ladies were terrifying, and they weren't going to save me when we were falling through the universe together, because they were the bad guys, and doomed.

I still think about that dream a lot.

The first dream I can ever remember involves a fish tank at school breaking and unleashing sharks through the classrooms. That was probably inspired by Jaws, or at least the incredibly few clips I'd seen of the film, and was just a metaphor for not wanting to get eaten by a shark.

Originally posted on the Tearoom of Despair on July 20, 2020. I'm going to get through Blake's 7 again soon, even with the existential horror in the bulbous lines of those Mutoid helmets.

robotic and emotionless science vampires, dependent on a blood serum to function.

It just occurred to me, reading that sentence, that the Mutoids might've been the inspiration for the Divine Assassins off Lexx.