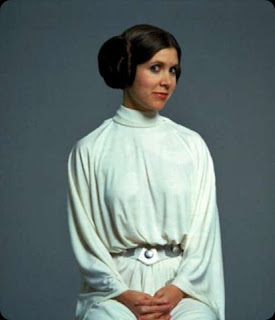 Star Wars was such a boy's club when I was a kid, but that didn't mean girls weren't into it too. They just weren't so loud about it.

My sisters went to the same screenings of the same films as I did, and were just as excited about the fate of Darth Vader on the car ride home as I was. But I was such a boy that only I got really obsessed with the thing and collected everything I could, including as many of the action figures as possible.

But my little sister - who turns 42 today - also got her own toys. She got Ewoks and Princess Leia figures, and played with them just as much as I played with my Death Star Gunner and Cloud City Pilot with the bent arm (I would take what I could get.).

But while I played mine to death and accidentally tore their arms off or blew them up with firecrackers, or threw them away in feats of unimaginable stupidity, she took care of hers, and they survived the years, remarkably intact.

Somehow, all these years later, I've still got a Princess Leia figures from the first two Star Wars films, complete and with all their limbs, and while some of the paint is a little chipped, they're in better condition than literally any other figure I own from that era. They ended up chucked in a box with my old GI Joes and Masters of the Universe figures, and are there still.

There's some kind of metaphor about girls knowing how to love something without smothering it to death, but I'm just a dumb boy who grew into a dumb man, and I'm not smart enough to figure that one out. One thing I know is that at least the girls have more of a voice there days, and that's a win for everybody.

Originally posted on the Tearoom of Despair on September 9, 2020. As Star Wars fandom continues to enable terrible and toxic misogyny, it's always good to remember the #1 rule of dealing with that kind of thing: Fuck those guys.