Second time around: Deadwood - We are not made for such complexity 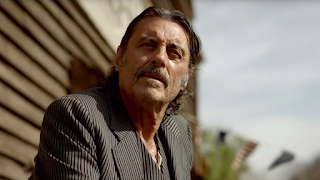 There is something in us that craves closure, in both our lives and fictions. We know we never really get it, that it's a lie we tell ourselves so that we can start over again, and that real life is far too complex for that kind of triviality. We are all informed and shaped by our past, and putting nice big full stops on it isn't fooling anybody.

The Deadwood television series famously lacked any sense of closure, no matter how apt it was that the series ended with Al on his knees, cleaning up the blood of an innocent, and sneering at the idea of telling someone 'something pretty'. There was unfinished business, especially with the most public of promises that further movies were coming. Nobody thought it would take 13 years, but they got there in the end.

The new movie leaves plenty of plot threads dangling - it's unlikely the Leviathan Hearst will take the latest indignities without some form of murderous rebuke, and his kind ultimately win, with the capitalistic giants of the 20th century following in his footsteps. Deadwood was always the most optimistic series about the American Dream, showing how a bunch of freaks and malcontents create a civilization out of the mud and blood, but the tyrants who will rob them blind are also being born in their midst.

But there is some sense of closure, with old scores settled and grievances aired, and positions of love and loyalty made clear.

Hearst is rejected by the community he always felt above, stamped into the road by a mob led by Jane and the eternal Garret Dillahunt. (It is always an absolute pleasure to see that many, many people looked like Dillahunt in the old west, and they all had their own tragic backstories and destines). Seth is tempted to return to old ways, but stands with his family, as is right and proper, and Sol and Trixie get their own happy ending, and new starts. Even Jane and Joanie prop up each other enough for final declarations of support, and General Samuel Fields meets his maker with dignity and wisdom. And Al Swearengen, in a majestic and epic performance by McShane, gets in a last line that is even more graceful and cutting than the last time.

It was overwhelming to watch Deadwood again after all these years, to drop into that world. And while total closure can be an impossible dream, it is more than enough to visit with old friends again, and see how they are faring.The years have not been kind for some, and others are holding up surprisingly well. That's more than we can ever hope for.