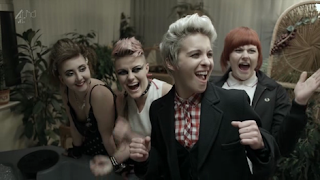 Although we seemed to be currently trapped in a dark and cynical world, I have an optimist's hope for the future, and that people are generally decent and good. That arseholes will get exposed for the arseholes they are, and get the treatment they deserve.

This is something that is not always expressed well in our fictions, where writers' obsessions with conflict mean people have to be dicks to each other in order to clash, but there are some small rays of hope out there.

Like the stoner delivery service it features, High Maintenance can be rambling and unfocused, but also has moments that remind you why people live in cramped mega-cities, where there are odd moments of unexpected community. There are still dicks and idiots, but people generally get along. And get really, really high. (Whether this is correlation or causation is for bigger brains than mine.)

Across the Atlantic, the films of Shane Meadows also get super dark, from 24/7's regrettable violence to the absolutely broken people of The Virtues, but also crucially recognise that there is light and laughter around the kitchen sink. There is genuine joy as people live from meager paycheck to meager paycheck, but they are still genuinely kind and thoughtful people, who may sometimes get out of their depth, but can always rely on each other.

Maybe I've just lucked out in real life, because my friends and family are all basically good people, nobody has ever really got into trouble, or caused much for other people, but they're still as windswept and interesting as anybody. And while I like a good roaring rampage of revenge as much as the next dork, it's nice to see that joyous realism reflected on our screens, every now and then.

Originally posted on the Tearoom of Despair on March 5, 2020. I'm still watching far too stories about total dicks at the moment.