We're all the mum in Jaws sometimes 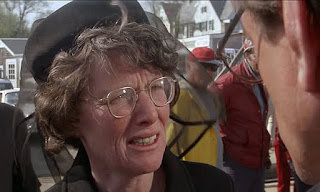 It feels so harsh, when Mrs Kintner slaps the shit out of Sheriff Brody in Jaws after her young son becomes shark food. Doesn't she know he's the guy that has been trying to close the beaches, who did everything he could to prevent needless deaths?

But of course Mrs Kinter - played with bottomless grief by the late Lee Fierro - doesn't know that, all she sees is a sheriff who failed to save her boy. And it's just one tiny moment of universal humanity in this great, great movie.

For Brody, the slap stings because he thinks he deserves it, that he could have done more. But it still feels harsh, because there are other people in that very room who are far more deserving of blame. He did what he could.

And yet, we all do it sometimes. We all look for blame in the wrong places and jump to conclusions and while it's not as horrific as Mrs Kintner, we all blame the wrong people sometimes. The person at the end of the help phone line who doesn't make the rules and is not getting paid enough to take your complaint, and we often don't know the full story.

When the full story does come out, those resposnsible for tragedies should always face judgement, (although that goddamn mayor is stil there in Jaws 2, which also tells you something about the way the world works.) But it's human nature to lock onto the most obvious target.

And while it makes us so much more complex than the mindless feeding machine prowling around offshore, it still stings like a sharp slap to the face.

(This post is not a confession for anything, and I'm not thinking of a specific example of inappropriate blame. I just really fucking like Jaws, even the painful bits.)