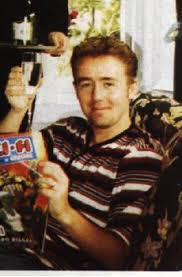 Reading old issues of the Comics Journal from the 1980s and there are a fuckton of words devoted to the complex and completely clear-cut issues with creators rights, with a bunch of very intelligent people taking a very brave stand and saying the artists should own their own work. But if they saw the end result of all this was Mark Millar, would they even fucking bother?


Because all those Journal words made it clear - the happy end result is that the creator gets all the financial rewards out of their talent. That's the destination and Millar worked out how to get there faster than anyone.


A lot of that talk about the glorious comics that will undoubtedly come with complete creative freedom was smashed to pieces when Image came along, and the world's most popular comic artists got their own way and immediately produced some of the worst superhero comics known to man.

But Millar got the power by playing the game - getting mainstream recognition with The Authority and the Ultimates, and then abandoning all that a decade ago, and telling his own kind of stories, they way he wants, with some of the best artists in comics. (Out of all the British writers who infiltrated American comics, Millar has the biggest appreciation for making sure his comics look good, and gets some of the best artists in comics by offering them co-ownership and all the financial rewards therein.)

And he's made an absolute fortune selling the rights and actually seeing the movies made (even if they bear little resemblance to his actual plots), and then cutting a deal with a streaming giant with megabucks to spend; making the kind of cash that the vast majority of the Silver and Bronze Age writers he grew up on could only ever dream about.

Mark Millar's comics remain terrifically superficial with that incredibly nice art, and are rarely much more than that, but have easy high concepts, a load of cheap laughs and some occasional social comment. I like some of them a lot, and find a little goes a very long way.

And he's also fulfilled that ache that fills those old Journal magazines. This may not have been the future they dreamed of, when the comic creators bill of rights was being feverishly drawn up on hotel rooms during convention season, but this is the future they got.