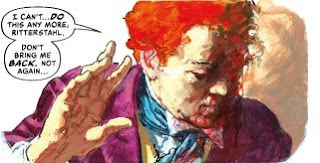 The nature of the anthology comic is that every story can't be a winner. There is always some mediocrity among the variety, and when you're casting around for a huge audience, you can't please anybody. At least you usually get some nice art out of it.

That's fine - different strokes for different folks, and all that - and there's a few that do nothing for me, even as they seem to appeal to others. The charms of the Fall of Deadworld series completely bypass me, but there seem to be a lot of people who don't think it's a turgid, stagnant mess, and we can both still get something out of the same comic.

It's probably safe to say that a lot of people find that most of the short stories are as pretty forgettable as I do. They perform an invaluable service of allowing new talent to show what they can do, but are too often clumsy without getting any energy going, and clever without being witty, even when given some great artists to work with (I have no idea who that demon puppet Quilli is friends with to get the cover love he gets).

Other long-running series with really strong art from veterans like Paul Marshall and John Burns also seem to struggle to get into gear properly. Skip Tracer still feels very excited about not much, and The Order has the delicate delights and blazing action of Burns' eternal artwork - still finding moments of emotional depths in shorts breaks in the cacophony - but the story goes on and on, twisted around and choking on its own timeline, with crazy battles of worms and machine that have no weight and little context.

The Zaucer of Zilk and Proteus Vex both try to do something different, which should always be applauded in a 40+-year publication, but were also somewhat inert beneath the always welcome psychedelic artwork of Henry Flint and Brendan McCarthy.

The most disappointing strip of the year was one that held the most promise - how could you go wrong with Hookjaw? It had a giant shark with a hook jutting out of his mouth, a 70s nightmare given new life, but was loaded it up with a tedious metaphysical mythology that drained away much of the appeal of a bloody big shark chomping down on some fools. I'm sure it worked for some, but bringing back the shark this way felt like another wasted resurrection.