The Diaboliks is Gordon Rennie's third series in his Cabbalistics Inc universe, following on from the long adventures of the original strip and the Inspector Absalom semi-sequel. Rennie famously got completely bored of the original team and wandered off, only coming back to tie things up in a few pages, a decade after he left everything dangling.

But one thing is obvious from the return to two of the original Cabbalistics crew in The Diaboliks: the writer is having a lot more fun than he did with the other series, with comedy cannibalistic monsters, sex-mad Italian detectives and a massively annoying old rock star. The monochromatic art by co-creator Dom Reardon and and Antonio Fusoon is even more fun, expressing gore in heavy inks, sketching out emotional horror with wildly loose lines and hiding terror in deep, solid blacks.

It's Rennie back at his best - delivering exceptional thrills with a combination of high concept fun and the exact right artist for the strip - and hopefully he keeps having fun for a while. 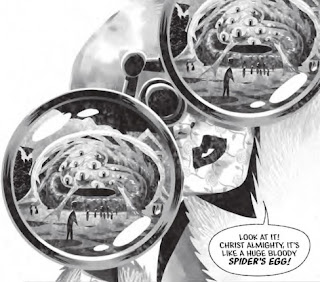 Stickleback is also back in black and white after a six-year hiatus, and while Ian Edginton's script is just as breathless and overcooked as it was in the earlier chapters, its highlight remains D'Israeli's rare ability to carve depth and weight out of blindingly empty space.

His art is great in colour - the various Judge Dredd and War of the Worlds comics he puts out at a reassuring pace attest to that - but D'Israeli's black and white illustrations are an incandescent delight, doing things within comic panels that literally nobody else can tough, a unique style that is timeless. It's worth waiting six years for.