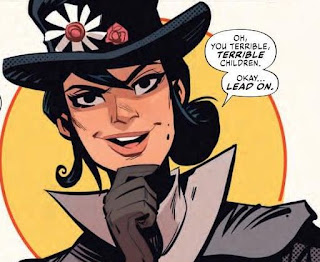 The mighty Pat Mills has always argued that 2000ad lost a bit of its soul when it aged with the readers, instead of keeping its eye on the kids, and there's ample evidence that he had a great point.

The current Tharg seems to think so, because for the past couple of years, 2000ad has been making a concentrated effort to get its hooks into a younger audience, with several issues designed specifically to appeal to that demographic.

It's a damn fine line to dance, because young comic readers are exceptionally good at telling when somebody is patronising them - kids love the violence and action that is bad for them, and you can always check out the Bat-fans' long-term hatred of Robin, (those Batman readers didn't need another kid to identify with, they just saw a smartass who made them look bad. No wonder they killed him off over the phone.)

But the 2000ad crew manage to make it look easy to stick to that fine line with its 2000ad: Regened issues, by getting in some top-notch creators, including some established writers and artists who know how to tell a story, and some keen young talent eager to show what they can do.  The Cadet Dredd stories are fun, and add tiny bits to the overall tapestry of the wider Dredd saga, while the Pandora Perfect strip from old faves Roger Langridge and Brett Parson are a bloody delight, as you'd expect.

There's strong original concepts in there - Finder & Keeper are some very serious ghostbusters, Department K gives a new look into its little corner of the Dredd World (and outside it), and Alex De Campi and Eduardo Ocana's Full Tilt Boogie had enough legs to sprint right into a weekly spot in the regular line-up.

There are four of these things coming every year and it does occasionally interrupt the flow of regular stories, but it's worth it, to bring new blood into the readership. There's an argument for a full-time Regened title - because four issues a year just isn't enough - but this is a promising way to get started on the comic.