Another great bookstore in the sky 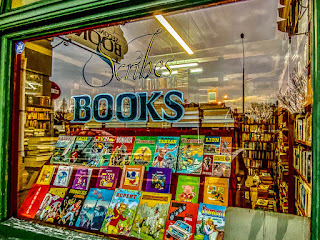 Another of the greatest bookstores I ever knew is closing its doors for the last time. Scribes Books, nestled in the student area of Dunedin and full of so much goodness, is closing at the end of the year

It sounds like the usual story, the end of a lease and internet sales finally doing in another real world store, but this one hits hard, because Scribes was always an absolute necessity when I was a young nerd.

Unusually, I didn't judge this second hand store by the caliber of the comics, which is almost always the #1 criteria. I did score some great stuff there in the early 90s - a few Legion of Super-Heroes comics I still have, and I once picked up a huge amount of Spider-Man comics from the 1970s for 50c each (and sold them off for a ridiculous profit more than a decade ago).

But it was exactly the bookstore I needed when I was looking for books by hipsters and beats and Buddhists and purveyors of the new scum journalism. I scored my first proper Ellroy there, and there's a Brendan Behan biography that I bought on Garth Ennis' recommendations for the writer, and I still have that today too. It was where you found the decent horror movie analysis books of the day, and where I easily picked up the last Riverworld books by Phillip Jose Farmer.

I can only get back to Dunedin every five years or so at the moment, but Scribes was always an essential visit. I was in there every Saturday afternoon for years and years and years, and never left without a book. And even though I've sold off and given away a lot over the decades, I've still got dozens with that familiar pencil pricing on the inside front cover. Scribes lives on there for a while, at least.