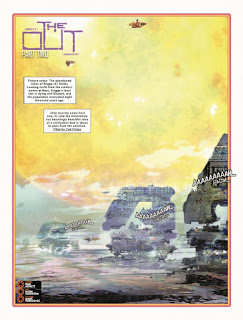 Dan Abnett always saves his best work for 2000ad, probably because he produces so much material for the comic that some of it is bound to stick. There is a lot of it that doesn't - Feral and Foe felt light and inconsequential, no matter how many tank-sized warriors it threw into the medieval meatgrinder, and Sinister Dexter remains just as inessential and inoffensive as it did 20 years ago, but just keeps on going.

But Brink is bloody brilliant, with the despair at staring directly in the face of the annihilation of our species manifesting itself as videos that drive people insane - footage of an impossible event that sends them off on horrific killing sprees. INJ Culbard's artwork is as open and inviting as ever and hides the horror of things beyond the veil with sparse and colourful lines. The most recent series even made the single desperately annoying thing with the swear words actually have a point.

And The Out is really, really good. It's tapping into that sense of isolation, of how we fit into these vast, vast universe, and also tapping into the Halo Jones drama of a woman going out into the infinite. But with an even bigger scale, the story of Cyd Finlea and her search for something she'll never find suddenly unfolding over deep time as well as deep space.

There is typically gorgeous artwork by Mark Harrison, who has been consistently doing fascinating work in the comic for decades now, but finds he new shades in completely alien worlds and environments that need to look like something never designed for a human. Harrison is getting his Chris Foss on one second, with gooey civilisations beneath the alien sunsets, and getting a tight closeup of somebody's soul shattering thenext. Even the sound effects thing that Harrison does, drifting them through panels, is as distracting as ever, but has still been toned down

And Abnett's scripting is sharp and thoughtful, always getting the human scale of this galactic, building her up with a dreadfully unexpected death and rebirth, and revealing what Cyd is looking for, and what she's found instead.

It's the most zarjaz story in this ghafflebette comic in this drokked-up year. But 2000ad always delivers, in times of plenty and times of pandemic. Splundig vur Thrigg, for another year.