Back on the Legion 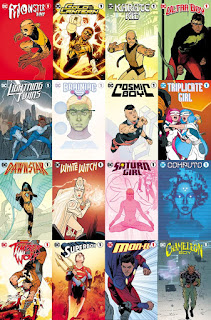 I don't buy nearly as many comics as I once did, but I always get one regular monthly superhero comic at a time, because that's all I need. I don't need the 52-part crossovers, I don't need 20 Batman comics, I just want the one comic every month to scratch that superhero itch.

For a long while it was the Waid/Rivera/Samnee Daredevil, which was good fun, and for a little while it was the Morrison/Sharp Green Lantern, but that didn't do anything for me. Now I'm back on the Legion, and getting the current comic by Bendis, Sook and chums.

There have been a lot of reviews and comments about the current Legion of Super-Hero comics that have pointed out its flaws - it's a startlingly superficial comic with a lot happening and no real depth to any of it, and they're all right. It's utterly weightless, and that's fine. I'm not going to find deep meditations on the human condition in the Legion of Super-Heroes (although that sometimes genuinely happens), but I am going to get lots of slick super-action.

That's what I want in my superhero comics, and it's what I get with the current ultra-compressed Legion comic. I've bought and read every issue so far - except for #6, because speculators fucking ruin it for everybody - and I honestly couldn't say what happens, plot wise. There's a few sweet lines I could quote, some new character traits that Bendis is bringing to the table and some terrific scene transitions and that's about it.

It's dense and packed and overloaded, and if I gave a shit about the big over-plot, I'd be in trouble. But I'm just here for the sweet super-punching action, that gorgeous overloaded art and smart doses of character action - the new Brainiac 5 has finally realised that being an entitled jerk just makes his job harder, so uses weapons-grade empathy to achieve his goals.

It's actually rare for a mainstream comic to be so intentionally superficial - lots of them manage it by accident - and it doesn't taste like the regular DC Universe slop, so I will eat it all up. I'm on until Bendis wanders off, leaving behind a million plot threads, and someone else comes in with a tight editorial leash and flattens it all down to the regular kind of DC comic with bullshit emotive arcs and endless goddamn soul-searching.

It's inevitable, but it's worth reveling in this tight future, for a little while longer.

It's refreshing to hear someone who enjoys Bendis as a writer. He's certainly a mixed bag, but I'm fond of his Ultimate Spiderman and Uncnany X Men

What do you dislike about Morrison's Green Lantern?