Kevin O'Neill's Seven Wonders of the Galaxy #3 - Dorado: The Head of Hate 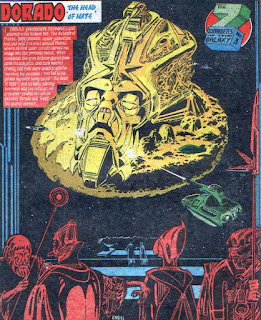 "In 2885 A.D., prospectors discovered a gold asteroid in the Rodium Belt. The dictator of Pharos, SADO DORADO, space-jacked the find and held it in orbit around Pharos, where skilled laser artists carved his image into the precious metal. When complete, the grim dictator glared down upon his subjects, and such was his cruelty that men were boiled in gold for opposing his excesses! This led to the golden monolith being called "The Head of Hate", and its daily passing overhead was the catalyst for a peoples' revolution, which deposed Dorado and freed the planet forever."