Fables: Dealing with the Happily Ever After 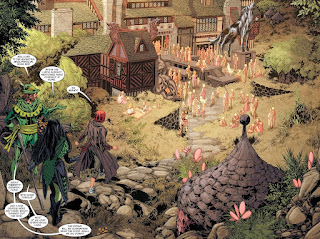 When talking about Fables in hindsight, it is generally accepted that creator Bill Willingham made a mistake to overcome the great, big, evil empire exactly halfway through his Fables series, because anything after that is going to be anti-climactic by definition.

But it made sense when it's a series that always had a healthy disdain for the very idea of 'happily ever after' taking all those fairytale conceits to greater heights, until they slam into the grey reality of the mundane world.

And defeating the Big Bad that early in the series was one of the best things it ever did, because the great big battle against the ultimate evil was never the point of this story, even if it was a lot of fun.

Several years after it wrapped up with seeming finality, Fables is back as a monthly comic, and for the first time I went back and reread the whole series in one go. Indulging in this kind of perspective always gives some new insights, like how the characterisations take a while to really get solid, or even how long it takes for the look of the book to really get into shape ,once Mark Buckingham takes over the main artistic chores.

And as a whole, the most interesting of the story is in the months after the great victory of our heroes. They get a tiny window of peace and quiet and then the consequences of their win become painfully clear, with sudden death and losses far worse than anything the Emperor inflicted on them in the previous battles.

It was always inevitable that Gepetto was going to get his arse kicked, but once that's done, anything could happen and frequently did. And with the massive cast of characters that you do end up giving a shit about, entire books could focus on the side adventures of Flycatcher or Bufkin or the Cubs.

The thrills do start to run dry towards the end - the cold war between Snow White and Rose Red never really felt like it was going to heat up into cosmic bloodshed and ended with a shrug (even the two most high-profile deaths of that conflict have been swiftly resurrected in recent months). But there are still moments of power, especially because Willingham was always gleefully willing to murder off vast parts of his cast, and when he had gods of tooth and claw going apeshit, bloodshed was inevitable.

The 'anything could happen' attitude of the post-Empire Fables kept going right up to the last few pages of the original series, which had to take things a thousand years in the future to see that there really can be happy endings in fantasy, even after all that.

So of course there's new Fables comics coming out and new adventures after that particular set of ellipses. I missed the news that it was coming back altogether and only saw it in the shop. It's  Black Label, but if I squint I still feel like I'm getting a Vertigo book, and it's picking up where things left off.

It's too early to say if it's any good, but Willingham and Buckingham are back on the tools and producing typically wonderful work, and there is some comfort in revisiting some old friends, for a little while at least.

This is comics, after all. There's no happily ever after here. Just the never-ending story.