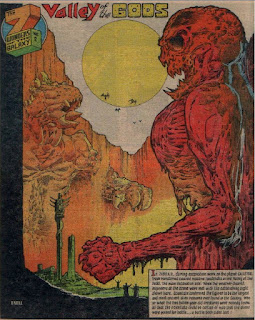 "In 2080 A.D., during excavation work on the planet CALISTOR, freak rainstorms caused massive landslides in the Valley of the Dedd, the main excavation site. When the weather cleared, engineers at the scene were met with the astonishing sight shown here. Scientists confirmed the figures to be the largest and most ancient alien remains ever found in the Galaxy. Who or what the two billion year-old creatures were nobody knew, all that the scientists could be certain of was that the aliens were poised for battle... a battle both sides lost!"