Catching up with Kirby, getting it on with the 70s crew 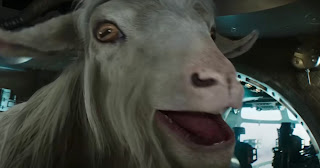 It took 50 long years for the rest of modern culture to really pick up what Jack Kirby was putting down the 1960s, and Marvel Studios is still making incredible millions of dollars from the ideas the big man came up with while commuting home on a Tuesday night in the 1960s.

They're still evolving. While the latest Marvel films are stealing details, plots and characters wholesale from the past decade's worth of actual comic books, their vibe is the same weird engines that powered Marvel through its 1970s comics.

So they're definitely keeping pace after Kirby's characters, themes and ideas about action really spread into cinema and the greater population and large more than a decade ago. Because they now feel like the weird 70s comics from second-generation writers like Gerber, Starlin, Englehart and a dozen others that Marvel pumped out. Still often little more than generic and solid superhero stories, but with strange tangents and questioning of reality, with heady doses of nihilism and existentialism.

All those young writers, tripping off their nuts and staggering around the streets of Manhattan at its most rotten, coming up with ideas that we'e only now catching up with in the 2020s.

The old comics themselves, weighed down by heavy exposition, haven't always aged well, but their ideas were timelessly bonkers. Now we can meditate with Eternity, or slide into a parallel world with Kang at his most time-twisted. The appearance of an elf with a gun is inevitable.