Do you see me laffin'? 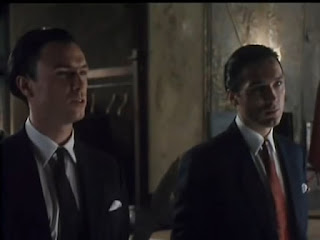 Sometimes I still miss the huge amount of trailers that they would put at the start of video tapes that you'd rent every Friday night from the local service station, informing us all of coming attractions from Roadshow or Thorn EMI. They could go on for close to half an hour and you could only skip them by fast forward, so you were still soaking up some of it before you got to the main attraction.

Some of them are burned into my memory - the trailer for the original Dawn of the Dead was literally the most terrifying thing when it popped up after the end credits of one of the Porky's films, and something like The Jewel of the Nile seemed to be on absolute everything, but that was okay, because Danny DeVito's mugging was always welcome.

With this kind of weird saturation, long before the colossal abundance of YouTube, even the most average of films could lodge in the memory. Take The Krays - a fairly okay biopic of the title twins who ruled a slice of London gangland in the 1960s. It's directed by Peter Medak who made the bonkers The Ruling Class, as well as Species 2 (although he also has directing credits on The Wire and Breaking Bad, so he gets the last laugh) and even though I haven't seen that trailer in 30 years, I can still never forget the highlight of the original teaser, and the delivery of one of the twins spitting out 'Do you see me laughing?'

I can't find the trailer that used to be on a million video tapes, but it's the line that comes 1.30 into this:

I can't remember the names of people I went to high school with for seven years, but I can't forget this line. I just couldn't say why, although it's the finest sneering acting you're ever going to get from a member of Spandau Ballet, but it lives rent free in the skull.

Just a tiny moment, burned into the brain by Friday night video binges. I don't know what the equivalent of that is for the streaming generation, but I'm sure it's out there. You just don't get to ever pick what sticks.