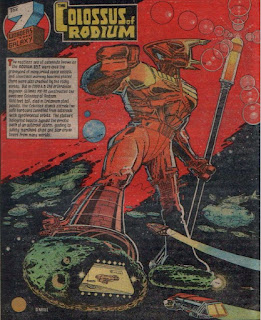 "The relentless sea of asteroids known as the RODIUM BELT were once the graveyard of many proud space vessels, and countless warning beacons placed there were also crushed by the rocky vortex. But in 2880 A.D. the Arthanian engineer GLIBNIX POT-PO constructed the awesome Colossus of Radium. 1500 feet tall, clad in tritanium steel panels, the Colossus stands astride two safe harbours tunelled from asteroids with synchronous orbits. The statue's hologenic beacon signals the erratic path of an asteroid storm, guiding to safety merchant ships and star cruise liners from many worlds."

It's been another hellacious week, so instead of more moaning about how pop culture left me behind for another endless seven days, it's just going to be some truly wonderful architecture by the remarkable Kevin O'Neill, published by 2000ad during the dawn of its golden age as a comic (Kev also did the first Nemesis story in one of these issues).