This is my life now: Reading the reads 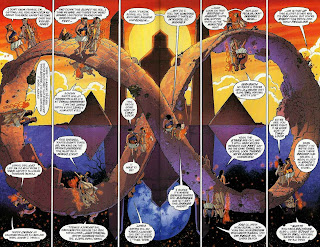 There are only many puzzle games you can play, and after a while, even the effort of following the relentless momentum of a movie narrative gets a bit much, but when I'm trying to stay awake in the middle of the night, there's always room for comic books.

When it comes to reading material in this state of mind, comics are so much easier to follow than the dense prose of a novel or magazine article. The mind tends to wander all over the fucking show when you have a new human sleeping on your chest in the absolute silence of 3am, but comics have that visual kick that helps you keep your place. Even if it takes half an hour to get through half a dozen pages, you never really lose your bearings.

And there is so much time to fill in during this fugue state, so it's possible to get through a small forest of comics. I scorched through every issue of Stray Bullets in the first three days home with the baby, swerved into a thorough re-read of all of Frank Miller's Daredevil comics, and have just about polished off all of the America's Best Comics by Alan Moore, from Top Ten to Promethea.

There are a lot of the naked emotional reactions that I was having with the films, but it's also been a chance to really pore over the craft of the things, and sometimes just stare at some beautiful art for a while. It's a chance to see how these huge, sprawling works all tie up and resolve, and it's a chance to really get through fucking entertaining comics.

I've been reading them over the shoulder of the new human, but she hasn't got a hope in hell of avoiding the comics as she grows up, and I look forward to sharing these with her one day, and seeing what she finds for herself. Judging by the way she stares at the bookcase of graphic novels beside the changing table when we're switching out a filthy nappy, she's already well on her way.
Posted by Bob Temuka at 6:22 PM