Horror begins in the Twilight Zone 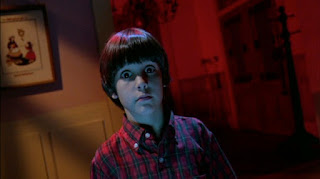 The first time I was allowed to stay up and watch a horror film in the usual Sunday Horrors slot on TV2, it was the Incredible Shrinking Man, which wasn't very horrific at all and certainly nothing scary - not even the giant spider at the end. But around the same time, I was also allowed to go to a Saturday matinee screening of the Twilight Zone movie at the pictures, and that scared the fucking shit out of me.

Not the Spielberg story - that was boring because I was 8 and didn't have much interest in slow meditations on the pain of aging, and George Miller's climactic 30,000 Feet was too exhilarating to be really scary.

But the suddenness of Dan Ackroyd becoming a Thing in the opening credits, and there was the eye in the doorway and the creepy fucking cartoons of Joe Dante's segment.  And even at that age, I had heard of something horrible happening on the set during John Landis' segment, and the dread of those awful deaths overhung the entire movie.

There was no internet in those days, so I had to spoil it for everybody personally, which I did for weeks afterwards at school, telling everybody at length about my first brush with a real proper horror movie.

It had scared the shit out of me, and I wanted more of it. So much more.