I couldn't get to Batman 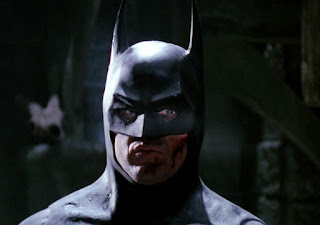 Thirty years later, and it's getting hard to explain how the first big Batman movie was a huge fucking deal, and I was just another 14-year-old dork losing my mind over it. I had the excellent prestige-format comic adaption, I had a lot of the bubblegum cards (and even bought a whole unopened box, and was gutted to discover I still couldn't put a complete set together from) I had multiple making of books and magazines, and I had two of the soundtracks.

But I just could not get to the movie, because I was 14 and poor and lived a half-hour drive from the nearest cinema. It was just a period of time when I just couldn't get to a cinema, no matter how hard I tired, and I missed a lot. There was about four years there when the only film I saw at a theatre was Edward Scissorhands during the afternoon in the school holidays, and even though I was absolutely desperate to see things like T2 and Star Trek VI, I just couldn't.

As soon as I got a car and some disposable income, I made up for the cinema drought, and once I moved to a decent-sized city, I was going to the movies six or seven times a week, and there was things like film societies and festivals and it was absolute heaven.

But for a few years, right in the middle of the teens, every single film I saw came from the video store. There was never a huge selection, but there was always something, and I watched hundreds and hundreds of films through the dodgy tacking. That's how I eventually saw Batman, nearly a year after its cinema debut, on glorious tape. (I did get to see it at the start of a midnight triple feature once, where there were only about 12 people in the whole audience, but I was so tired I fell asleep before the big parade.)

Later on, when I could get to the cinema regularly, I saw Batman Forever three or four times at the movies, because while it's still cheesy as fuck, it was still fun and colourful and sexy as hell. I haven't missed a Batman film at the movies since, but I don't think I ever really got over that frustration of the early teens, when I was stuck in a small town, far from the flickering lights.
Posted by Bob Temuka at 7:16 PM