This is my life now: Gaming the game 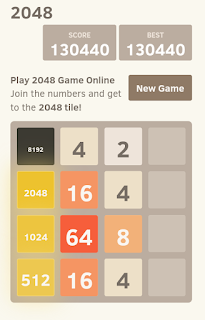 When you absolutely, positively have to stay awake in the middle of the night, but can't move too far without disturbing the new human sleeping on you, nothing beats playing a puzzle game on the phone.

I ended up laying a lot of Sudoku, because I find that game eternally fascinating, but even then it was so easy to lose games through inattention. I found the absolute best game to keep things going was 2048, you had to pay just enough attention not to fuck things up, but could get into a semi-mindless groove.

Plus, it always takes ages to get to the really tricky stuff - getting the target 2048 is a piece of piss, racking up a 4096 is relatively easy - but getting to a 8192 takes a fucking shitload of swiping, and kept the mind occupied for hours in the deep, dark hours of the night.

Staring in wonder at the baby also took up a lot of time, but it was the puzzle that really kept me conscious.