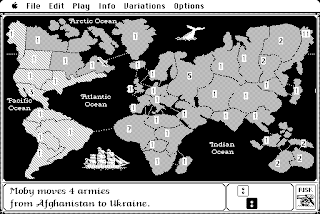 I haven't played the classic version of Risk in years now, but I've still got the basic strategies filed away, ready to bring out at a moment's notice. They don't guarantee I'd win every game, but they always mean I'll be there at the end.

They are strategies formed and tested on a shitty monochrome video game that I played at one of my first jobs in the mid-90s, and then finely honed in countless campaigns with a group of mates who were just as experienced and cunning as I was. With blitzkrieg options and nuclear weapons involved, they were fast paced and ruthless.

But come at me in any way, and I'll have a plan. There's Fortress Australia, which is near unbeatable; or the American Creep, always moving north; or the African Home Base, which sets you up to take on anybody at any time. If the cards are against you at the start, there's always the Malignant Tumor option, where you just sit on the border at the top of Europe and Asia - nobody attacks you, because your territory is worthless, except nobody wants any other player to have those continents, so you just sit there and wait for the time to strike. It can take hours, but it's hard to defeat.

Following all these strategies always works, while also allowing for some extreme improvisation. All other strategy games are a pale imitation of Risk, and you play me at your peril.
Posted by Bob Temuka at 1:49 PM