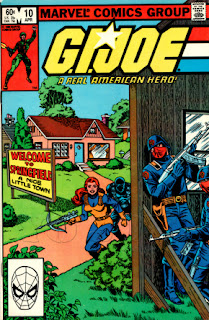 The GI Joe comic in the 1980s was a lot better than it had any right to be. As a gigantic ad for the action figures and accessories, it still managed to do genuinely interesting things with world-building and comic craftwork, and building up character without resorting to clumsy dialogue.

Larry Hama did an amazing job with the writing chores on this silly little comic. There were humongous and fast-moving action scenes, scores of witty asides between the gunplay and a pleasing willingness to murder many of the characters without a second thought.

But one of the best things about it - which was hugely resonant in the yuppyfied 1980s and is just as relevant today - was the way he hid a terrorist organisation between the facade of small town America.

Cobra's recruiting methods were straight out of the conservative playbook - using working class dissatisfaction with government dysfunction to fuel an unabashedly fascistic organisation. Recruiters brought in grunt soldiers through door to door salesmen and financial pyramid schemes, and soon had them tooling up with high-powered weaponry.

It was right there, under the surface as much as the Joe's headquarters were buried beneath a desert. And behind the picket fences and sensible clothing, there were torture chambers and genetic experiments and ninja clans and weather dominators, because that kind of terror is everywhere.
Posted by Bob Temuka at 8:02 PM