Five stars, or nothing 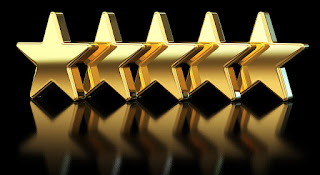 Giving something a star rating at the end of a review - whether it's for a book or comic or movie or album or anything - is a cheap, easy way to get an idea of whether something is any good or not, without bothering with any pesky details like context or depth. I try and read as many reviews as I can, to get the broadest view possible, and a star rated shortcut certainly helps.

But I'm still a total fucking snob about these things. I can't get behind any kind of letter grading - I still have no fucking idea what a B+ means - and four star reviews just don't do it for me.

It's gotta be a five star-system or nothing, because that's the easiest to instantly grasp - five stars mean it's essential, four is pretty good, three is average as hell, two is mediocre and one is diabolical. That's all you need. You certainly don't need to start throwing half-stars in there, you just have to commit to the rankings.

The five-star ratings in Empire always stick in my mind as the best example - for years I made a point of hunting down every five-star review they gave (they haven't been quite so accurate in recent years), and it's always a bit disappointing when something gets three-stars, because that just means it's bland, and probably not worth the time - even a one-star can be worth watching for the awfulness.

This is a totally irrational way to consume data about entertainment, but it still always works for me.