I'm not a foodie, but I'm up for anything 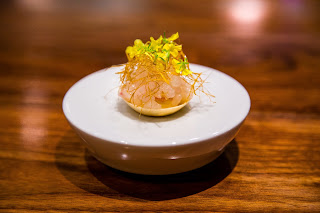 I fucking love a good pie and chips, but the best thing I ever tasted was a single piece of ravioli at the Chef's Table at Brooklyn Fare in New York City a couple of years ago. It's a bit more expensive than a good steak and cheese pie, but you get your money's worth, if you're willing to try something new.
Posted by Bob Temuka at 6:38 PM