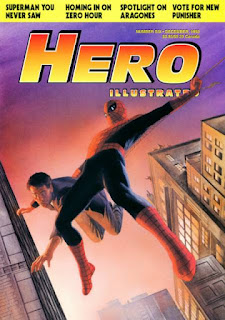 Magazines about comic books were such rubbish when I was a kid. There was always some kind of Starlog spin-off that was far more interested in the shitty cartoon adaptations than the actual comics, but that was all there was in my hood, down on the arse end of the world.

I later did get a couple of price guide magazines, right about the time Image launched and everything was fucking crazy. I wasn't interested in the values they ascribed to these comics - I didn't know anybody who would buy the damn things - I just wanted to find out what the first Morrison issue of Doom Patrol was, or how long the Grendel comics lasted.

An issue of Heroes Illustrated – the Wizard clone that was very slightly more interested in esoteric comics outside the superhero mainstream – was a revelation when I found it in the local Paper Plus, sandwiched between the Red Dwarf Smegazine and the new Q. Beneath an Alex Ross Spider-Man cover, it was full of reviews of the latest comics and interviews with all the coolest creators and previews of all the new shit, and everything else I needed.

I got stuck into Wizard for a while, and it's still a secret shame that belongs down the back of the cupboard, but all that is back there are the old issues I can't get rid of. It was an idiotic magazine, but as a snapshot of that kind of comic culture - right at the point I was really into that comic culture - they're unbeatable.

Then I became a Comic Journal nerd for a long, long time. I still am, and one of the great pleasures is finding an old issue that has a 35-page interview with Harvey Kurtzman or Joe Kubert or some other deadest legend. They are still putting out new issues, as a rarely-seen brick of comic goodness, but I genuinely miss the regular blood and thunder the magazine brought to comics, even if parts of it have led to the current toxic climate of discourse.

I was never really hooked on Amazing Heroes, which had pretty much ended by the time I ever got near a comic shop. I literally never saw an issue of the Comics Buyers Guide. And I have little time for the endless Golden Age checklists of Alter Ego.

But Bronze Age comics are still my jam, and now I'm into Back Issue, and still get it very month. Some issues I don't have a lot of interest in, and some articles that become plot synopsis are the worst, but I always look forward to the next issue, and finding out what the next theme is. It's the kind of thing I would have killed for as a kid, but I'll take it, at last.
Posted by Bob Temuka at 6:46 PM