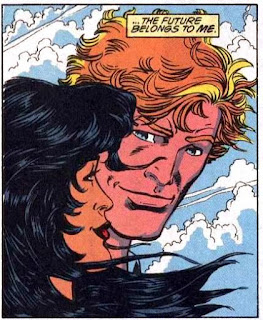 ! I am more interested in reading Mike Baron's run after recently finding out he was on cocaine the whole time, though.

! Even after sneering like an arsehole at anybody who freaked out over a recent Green Lantern comic, I was still shocked, stunned and appalled that Barry Allen had gone bad near the start of Waid's run, and finding out it was the Reverse Flash all along was an enormous relief.

! It was just so weird to have a comic at the time that was so unashamedly romantic – Wally and Linda's life together was wild, crazy and forever. Their love was literally the tether keeping Wally from vanishing into infinity, and when every other superhero at the time was too busy trying to be cool and edgy and wielding as many blades and intense emotional pain as possible, this dorky love was gorgeous.

! The Waid run also really dug into the heritage of DC's super-speedsters, setting a template that many, many superhero comics - and DC comics in particular - followed. It wasn't just the setting up of the new generation through Kid Flash and Ipmulse, but recognizing that there was a long lineage of heroes like Max Mercury and Johnny Quick, who all had lessons to teach the next generation, and all the generations to come.

! These comics had some fairly average art for most of the run, but Ringo's was the best.

! These comics came out when I was moving out of home and I was in a new city and sometimes, during some long lonely winter nights, made everything a bit better.

! I never really came back to the Flash after Waid left. Johns was nasty, and even though he was the Flash when I was a kid, I never really gave a damn about Barry and powerfully didn't care when he became the focus of the Flash comic again.

! Wally almost died a lot, because that's what Flashes do, but he always kept running.

! They say Wally is dead these days, but I don't believe them.
Posted by Bob Temuka at 6:29 PM