Feeling the LOVE with The Beatles 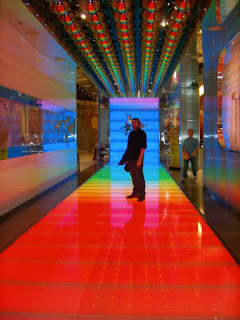 I've seen some opera and sat in the front row of a Broadway show and been to a lot of plays and even managed a ballet or two, but the most absolutely impressive thing I ever saw on stage was also the cheesiest - it was the Cirque du Soleil show about the Beatles in Las Vegas.

Like everybody else on the planet, I love their music, and the show was so visually spectacular, with bedsheets that spread out to cover the whole arena and people on multiple bungee cords bouncing across the cavernous space. It was so much better than the touring Cirque shows I'd seen, with the huge theatre designed for the show, with all sorts of moving parts and incredible stagecraft.

And sure, I'd just had one of those monstrous Vegas daiquiris just before going in - and given myself a body freeze that knocked me on my arse for a few minutes - but I did find the ending ridiculously emotional.

It was when after two hours of all this crazy music, and all these actors and dancers and acrobats and analogues representing the members of the group, they finally showed photos of the four members of the band, and it was overpowering. These four Scouse chancers, who somehow created the music that objectively made the world a better place, spawning countless imitators and creating new styles of listening, all loaded down with love, and they're just some dudes from Liverpool, y'know?

I needed another daiquiri after all that, and I drank it a little slower that time.
Posted by Bob Temuka at 6:32 PM