Blood and bone in the Star Wars 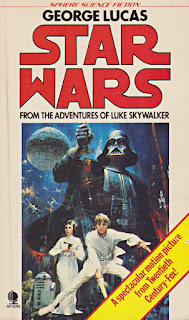 Long before it ever regularly played on TV, or was even really available on video tape, one of the few ways to relive the glory of the first Star Wars was through the novelisation, even though it totally made me sick one time.

To be fair, I was feeling like a poorly 8-year-old already, because I was in hospital to have an operation on my sinuses. But I had a couple of Indiana Jones comics that Mum had got for me, and I had the Star Wars novelisation to re-read while I lay in bed recovering.

It's a terrific little book, and one of the few novelisations I would ever return to, over and over again. It wasn't that there was a huge amount of new material - although there were a few scenes that weren't in the movie - but that author Alan Dean Foster had given the whole gritty galaxy even more details, and extra levels of that lived-in feeling that made the movies so appealing.

And then, in the first few pages, as the fight on a fleeing spaceship suddenly ramped up, the detail got a bit too much. It was all the talk of flesh and bone being ripped apart by blaster fire that got me, and my imagination was full of bits of human beings floating through space

It genuinely made me ill, and I had to stop reading it for a while, and go back to the Indiana Jones comics, where people still died in tasteful ways, without any of the viscera.

But I still kept going back to the Star Wars book, because anything that makes you feel anything, even if it's a gross physical reaction, has to be worth something. It's a great little book, gore and glory and all.