All sorts: Beyond, Sightseers, Finder, The Score, Solaris, Reset

This week, I have been mostly watching Parks & Recreation, and reading more Back Issue magazines.

But there is still plenty of time for all sorts of other stuff. 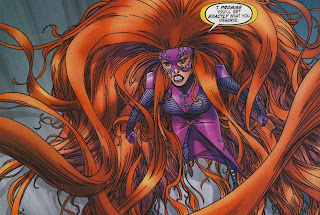 Beyond was a minor Marvel mini series from a few years back, by the much missed Dwayne McDuffie and Scott Kolins. It came out right at the same time as all that Civil War nonsense, and was spectacularly out of fashion at a time when Reed Richards was being a suspicious dick towards Spider-man at a bloody funeral.

No wonder it’s held up so much better than most of the Marvel titles at that time. Beyond is still a pleasantly nostalgic read, and even though it’s just another six-issue comic designed mainly to give characters like Hank Pym, Firebird and Deathlok something to do.

It’s intentionally hitting those nostalgia buttons – targeting specific vibes of time gone by. Pym and The Wasp have been fighting the good fight since the sixties, there is some very silly, very seventies cosmic shenanigans, an eighties dash of treating it all with super-seriousness, (and just the slightest touch of realism) and a nineties tendency to throw a bunch of random characters from the back catalogue together and treat them like actual human beings.

So I ended up liking Beyond much more than I thought I would when I finally got around to it recently. It had almost no impact on the Greater Marvel Saga, but it’s all the better for it, and manages some sharp characterisation (It’s the only comic where I’ve ever liked The Hood, and it also uses the only version of Deathlok I’ve ever given a damn about).

McDuffie was always so good at these straight-up superheroics, with his work only suffering when it was hammered into some Grand Editorial Vision, and Beyond is the perfect example of this.

It’s one of my favourite times of the year right now, when the NZ International Film Festival rolls into town.

I don’t go as crazy as I used to, but I always see half a dozen films each year – usually a mix of weirdo horror, supreme arthouse, worthy re-release and some kind of music documentary. I already saw Cabin In The Woods with an appreciative audience last week, and a magnificently loud and brilliantly huge print of The Shining yesterday, and Killer Joe last night, which managed to be even more spectacularly trashier than I expected.

But my favourite film of the festival so far is undoubtedly Sightseers. I’ve made no secret of my fondness for Ben Wheatley’s films, and after the fucked-up gangster shit of Down Terrace, and the fucked-up horror shit of Kill List, Sightseers is the fucked-up romantic comedy shit.

It’s really horrible, and really funny, and I’m always after that in a film. It’s got tender moments of madness, some achingly beautiful natural landscapes and some remarkable gore. It has somebody getting their face bashed in with excruciating detail while there is a passionate reading of Jerusalem on the soundtrack, a wicked ending and a giant fucking pencil. It’s about ley lines, and politeness, and broken people finding some kind of happiness.

It’s just about everything I want in a movie.

It’s a shame that the thing that makes Carla Speed MacNeil’s Finder comic so interesting – that fact that it’s so complex, impossible to categorise and difficult to even describe – are the same things that make it hard to get into in the first place.

I mean, I’m 350 pages into the first big collected volume, and I have no fucking idea what’s going on.

But I want to know more, and that’s always a good sign.

On the other hand, the latest Parker book by Darwyn Cooke – The Score – is effortlessly smooth and goes down like good whisky. There is less of the storytelling experimentation that Cooke used to hook the reader in the first two books, but the more straight-faced the storytelling is, the more effective it is.

It only took me a couple of decades to get around to watching Andre Tarkovsky’s Solaris. It was totally worth the wait.

Tarkovsky reckoned the main purpose of the scene on the highway was that it would drive all the stupid people out of the cinema, but it’s brilliantly intense cinema, even when nothing is happening. (And very, very funny – of course a modern Soviet filmmaker would have a hard-on for a modern traffic system.)

And the bit at the end with the dripping water is driving me crazy. Top stuff. Now I’m off to watch Stalker. 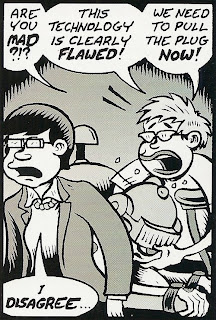 For a new Peter Bagge comic, the four-issue Reset min-series ended on a surprisingly sweet note. Bagge is getting soft, man.
Posted by Bob Temuka at 11:45 PM

To be fair, after the ending of 'Apocalypse Nerd', (which is great but probably the bleakest story I've ever read, managing to be harsher than even The Road or Crossed) anything Bagge does is going to be fairly cuddly by comparison!

I am exactly where you are in the firstFinder volume right now, and I thought I was the only one that felt completely lost. I'm sure it'll coalesce in the next 350pgs - I'm taking the same approach to it that I take to any David Milch work - but I was starting to feel like the only one floundering.

By the way, I've been a long-time reader, first-time commenter. I love the blog - please keep it up. Thanks!