The perfect comic: Love and Rockets # 28

It’s Love And Rockets #28, by Los Bros Hernandez, and as far as I’m concerned, it’s the perfect comic. 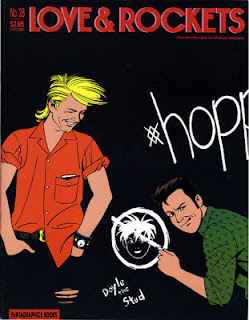 It was published in late 1988, which makes it nearly 25 years old, (although I didn’t actually get around to reading it until three or four years later). It’s a Jaime-heavy affair, with four complete short stories from him in the issue, although Beto compensates for the lack of pages by producing one of his best comics ever.

Both of the brothers were between bigger storylines – Jaime was in a long and fruitful interlude period between the more structured Death of Speedy and Wigwam Bam, while Beto had just floored everybody with the stunning Human Diastrophism, and was about to hit with the one-two punch of Poison River and Love & Rockets X.

In this period between these Important Works, the brothers Hernandez crafted touching little stories of life, love and art – stories that, all these years later are still funny, moving and alive. 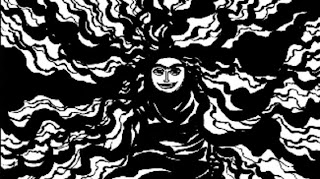 Beto’s sole contribution to #28 is his Frida Khalo comic – a 12-page biography that is both informative and haunting.

I know there are at least three people who will scowl heavily at me if they catch me using the j-word, but it’s the juxtaposition of the art and words that takes a straightforward story (of a fairly extraordinary life) and makes it a transceendelty beautiful.

There are no speech balloons in this comic, just caption boxes telling the factual account of the life of Frida Khalo, using the tone of the dispassionate scholar to recall her tragedies and triumphs.

But the art – which Beto apparently just made up as he went along, with little planning or forethought – is staggering, a dark-humoured and surreal remix of Frida’s art through his own head. Beto has Tonantzin wander through, portrays real-life events as if they are half-forgotten dreams and represents the lady herself represented as a graceful deer, brought down by savage hunters.

In any other comic, Frida would be the undisputed masterpiece. Although it still arguably is, Jaime’s work in this one issue is just as stunning and worthy of recognition.

It’s just four little stories, none longer than six pages, but everything that makes Jaime’s work so appealing is on display in this one comic. There is the humour of good mates, and the tragedy of lost chances, and the beauty of just hanging out.

The comic is bookended by two funny and beautiful stories by Bizarro Xaime No 1, and both still make me laugh. Boxer, Bikini or Brief has Ray slowly and inevitably losing his shit at the art board, Danita’s poise when posing and Maggie’s tremendous ideas about her own posing. Lar Dog: Boy’s Night Out #1398 has more than a hint of melancholy – the idea that for some people, getting really fucked up every night and getting into fights is as good as it’s ever going to get – but still cracks me up: the way the model assumes Lar Dog is coming on to her when he honestly couldn’t give a shit, or “He must have had at least eighty-nine beers tonight”.

And, just for more laffs, there is also some Li’l Ray, and Jaime’s kid stories are always odd and adorable. 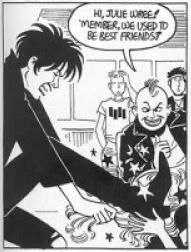 And, of course, issue number twenty-eight has also got Tear it Up, Terry Downe, which is still my favourite four pages in the extremely rich history of L&R.

Thirty-six panels, and not a single bit of space wasted. A staccato story that streches over a decade or so, and never feels rushed or cramped, with Jaime capturing perfect moments of love and despair and confusion and more love.

It's short, but remarkably efficient. It sums up all the beautiful complexities of Jaime's work, as it shows the life story of one of his characters - a staggeringly gorgeous and totally stuck-up woman - in all its infinite complexity, unearthing silent motivations that explain severe actions.

It also showcases Jaime's wonderful way with words - one of my my very first internet aliases was 'Stevie Teevee' - and features his art just as Jaime perfected his art style, all heavy blacks and gorgeous lips floating in space.

It was also a magnificent reference work - #28 was the first proper issue of L&R I ever bought, and figuring out the relationships between Maggie and Hopey and Terry and Del fuckin' Chimney was made a whole lot easier with this short story, even if there are still hidden depths to these characters that are still being hinted at in Jaime's current comics. 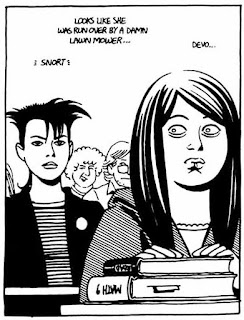 So yeah - it’s a personal thing. I love this comic because it's a brilliant comic, but also because I fell in love with it at one of the most brilliant times in my life. There is a very faint tomato sauce stain on the panel of Terry and Hopey in the bath, which has been there ever since me and a girl named Lisa were sitting on the grass at Timaru's Maori Park Pool, eating hotdogs and reading comics in the wonderful summer of 92/93.

The Hernandez Brothers have been at the top of their game for 30 years, producing scores of brilliant stories. Their latest work is every bit as good as their older stuff and, as ever, I'm desperately keen to read the next issue of Love and Rockets.

But no matter how good the new stuff is, there is always a place in my comic-lovin' heart for L&R #28. It’s the perfect comic. Who could ask for more?
Posted by Bob Temuka at 10:22 PM

Great call. I started L&R with #26, which was hard going - the end of Diastrophism and the start of Valley of the Polar Bears, neither of which were great jumping-on points.

But of course there was enough there to keep me coming back, and #28 was definitely where it all fell into place and I knew I wanted to, and could, navigate and understand these evidently complex and self-assured works. What I love L&R for most is not patronising me or cutting me any slack as a new reader.

Great post; you have reminded me what a superb comic book this is. I got my L&R comics way up on a shelf above the tv and now, damn you, I'm going to have to clamber up there and risk breaking my neck to read this masterpiece again. The Lar Dog story particularly sticks in my memory, a story soaked on blood and booze, the squalor of Lar Dog's domestic life, his dead marriage and his wife's eyes sequestered behind her glasses.

You may even have inspired me to read Gilberto's story about Frida Kahlo. I have to confess, all through the years I have routinely left his pages unread.

Thank you for sharing your favourite comic. Although I reckon if I'd been sitting on the grass with a girl named Lisa at Timaru's Maori Park Pool reading comics, whatever I was reading would have become my favourite comic.

Great choice. One of the early L&R letters columns described Los Bros Hernandez as "cruel" because they "make me fall in love with ink and paper."