Lovecraftian horrors are a natural fit for pitch-black noir stories – they both share a horrified cynicism and lack of hope. One of them deals with existential terrors on the cosmic scale, and the other tends to focus on the dark pits of an individual soul, but sometimes there isn’t any real difference between those two things.

Two of the most recent attempts to go for a literary mash-up like this – to mix damsels in distress with people who have tentacles where their faces should be – come from two of comic’s most talented writers, and both succeed or fail on the relative merits of the artistic talents.

Ed Brubaker and Sean Phillips’ Fatale brings these horrors into the dark streets of post-war LA, while Neonomicon, by Alan Moore and Jacen Burrows, sees cosmic perceptions of time slap up against FBI investigations and horrible cults. They’re both good comics, and are both trying to tap into certain themes, but I definitely like one of them more than the other. 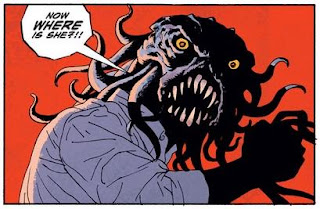 Fatale is the latest long-running story from the team of Brubaker and Phillips, following on from the artistic success of Criminal and Incognito. The first Fatale story arc wrapped up recently, but the second is already underway, with the creators showing their usual enthusiasm for getting things rolling with a couple of quick, solid stories.

While I still prefer Criminal, it’s hard to begrudge them the desire to stretch out a little bit, and mix some vast, eldritch terror amongst their usual cats of losers, wasters and honourable men.

It’s a lot bleaker than either Criminal or Incognito, but there is hope, with men and women – both good and bad – making terrible sacrifices to keep the horror in its place.

Meanwhile, somewhere else entirely, Alan Moore is embracing his inner Lovecraft  in the recent Neonomicon. It’s an Avatar comic, and fits the company’s overall style perfectly, with loads of gore, sexual violence and big ideas that never quite pay off.

There is always something worthwhile in an Alan Moore comic, and his latest little apocalypse does have the usual charms and wanking gags. The setting is more modern than the usual noir, but it still has plenty of detectives and sudden death and people skulking around in alleyways, a familiar formula from a thousands noir tales, even before the big, green monster shows up.

Neonomicon is more ambitious than Fatale, making a case for a new perception of reality and time that will be familiar to anybody following his (or Grant Morrison’s) work. But I ended up liking Fatale a lot more, largely because of Sean Phillips.

Jacen Burrows is Avatar Comics’ top man, working with some of the best writers in the world on hardcore adventure stories. He is pretty good at bringing the intensity with some startling gore, but I find his work just too stiff. While he’s got all the basic arts of craft and storytelling, his line is so rigid, it strangles the comic. It would be interesting to see him take on some paints or something, but his clear and open style is just too clumsy to be really effective. 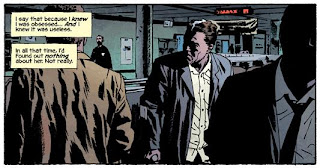 Sean Phillips is a different case. He’s not tied to any one company, and tends to follow writers more than than anything else. His work with Brubaker has been consistently exceptional, capturing mood and action with equal grace. His brash and harsh line, soaked in sharp colours, is always gorgeous.

The Brubaker stories he illustrated are probably so successful because Phillips gets to draw the things he does best - shattered faces hidden in shadow, brief bursts of ultra-violence, the odd monster (in both creature and human form), and beautiful women with dark souls. And he gets to do it all in Fatale.

And so, while the ugly Neonomicon makes a sweetly compassionate argument that harbingers of the apocalypse don’t have to be total dicks about it, I enjoyed Fatale a whole lot more. Both stories have their flaws and strengths, but I can find no flaw in Phillips.
Posted by Bob Temuka at 7:34 PM

Ha. "And so, while the ugly Neonomicon makes a sweetly compassionate argument that harbingers of the apocalypse don’t have to be total dicks about it." Nice summing up. I like it.

Brubaker and Phillips are a tough team to beat, even when the other side has Alan Moore. They seem to have a synchronicity that works perfectly for this genre.
Criminal, Incognito, and the vastly overlooked Sleeper (Still my favorite work by them) are all essential reading as far as I'm concerned.

Fatale Is one of the worst comics I've ever read, even when I consider the awful Liefeld comics I read as a kid. Pedestrian art, ridiculous prose in the captions, bad dialogue, one-dimensional characters, save for Walter Booker, pretty predictable story, an unsatisfying blend of horror and noir, and in the end it's neither interesting noir nor interesting horror.

Its success and critical acclaim baffles me.

Certainly, I was hoping to enjoy it since it came well recommended, but I just don't see what's intelligent, original or entertaining about it.