Harvey Pekar always had a lot of things going on, so it’s no surprise that there are more of his excellent books coming out, two years after he died.

A new one came out a couple of weeks ago, and is all about Mr Pekar’s take on the complexities surrounding the state of Israel, and there are likely to be more. Harvey was always working on something, and there is still a life’s worth of writing to be re-appreciated and unearthed.

But even if there is more to come, his outstanding book about his home town is a proper Final Work From A Great Talent, as Harvey reflects and ruminates on his town, and his life, and the way they mix together. 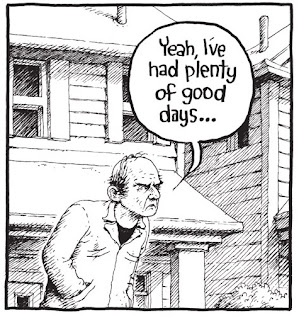 Ego can be defined by geography, and if you live in one place long enough, you’re going to become intertwined in ways that are impossible to overcome.

Harvey Pekar could not be more Cleveland if he tried – he shared with the city those feelings of aching loss for the past, fierce pride for the present and slightly upbeat resilience for the future. He was broken down a lot of the time, but not completely. Harvey liked to moan a bit, but he was still always enthusiastic about the things he loved, and he loves his city.

His book about Cleveland – beautifully drawn by Joseph Remnant, whose consistency is above average for a Pekar book - mixes personal nostalgia for the town with historical lessons, a look back at the founding of the city, and the day his favourite baseball team took out the championship, and the day he met his first wife. It’s another rambling comic by a rambling man, and that’s what makes it so enjoyable.

Harvey doesn’t just dredge up dry history, he goes straight for the details of the things he loves, like a decent second hand bookstore, and the sadness of nice neighbourhoods descending into slums, and more baseball, and his mate Toby, and the way you can still eat the ancient filling in the pipes of an old Twinkie factory, or the quiet beauty of a walk in the park.

I never liked Harvey's comics until a couple of years ago - they always seemed so clumsy and stilted, but then I realised that was part of the point.


Now, I can't get enough of Harvey's work, and I feel a little bad that I'll never be able to tell him how much I appreciate him. His comics are snapshots in time, and have a voice that is absolutely distinct.

It's not just the way he captures the voices of the people he meets (although his skill at choosing just the right quote that sums up a person is unparalleled). His books after the last few years have had that sense of tired anger at injustice, but also a pleasant and cosy vibe - he just wants to have a yarn with somebody in his books, and isn't too bother if nobody is really listening. 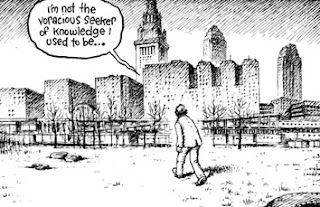 It’s this sense of warmth, along with those these witty lines and brief asides, and the glimpses at the lives of the interesting folks he meets along the way, that make Harvey’s comic so charming, right to the end. He can make wide and general acknowledgement towards the loves of his life, or how easily he manages to maintain a frugal breakfast.

The Cleveland book is all over the place, which is always when Harvey was at his best, and a fine testimony to a man and his city. We’ve heard some of these stories before, but it’s nice to hear them again.

Even if there are a few more Harvey Pekar books to come, this gentle and harshly fair book sums up the man’s life perfectly, and will stand as an enduring work.