Fast-forwarding to the good bit: Invincible volume 14 - The Viltrumite War

While The Walking Dead has shuffled its way to the top of the sales and a sea of critical opinion with all the relentless drag of an undead horde, Robert Kirkman’s other long-running series also keeps trucking along.

Invincible – the story of a super-powered teenager who discovers he’s descended from an alien race of enormous assholes with incredible power – is approaching its 100th issue, and even though it hasn’t inspired any insanely successful TV show, it has been comfortably telling its story at its own pace.

Kirkman’s comics can be shambling, silly and very, very predictable, but by God, the man has a work ethic, and he sticks to the story he wants to tell, when other writers are distracted by new and shiny things. And this perseverance can really pay off. Three or four trades of the Walking Dead can climax in shocking fashion in one brutal moment, and years and years of set-up and development can lead to unexpected rewards in Invincible.

Or you could just skip most of it and get straight to the point. That works too. 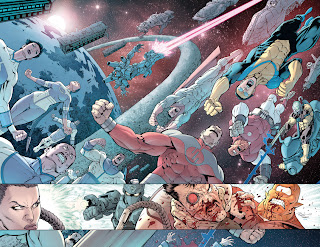 I read the first six or so trades of Invincible a couple of years ago, thanks to the wonderful local library, and they were pretty enjoyable. A pleasantly old-school comic, with clear, open and cheerful art by Cory Walker and Ryan Ottley, that also takes some extremely gory liberties with the human form as superheroes smash through bodies, sending blood and guts flying everywhere.

Invincible’s main appeal – outside of these intense action scenes that would pop up out of nowhere – is its main characters. There was the occasionally painful Kirkman cliché - often involving characters who run off in tears for plot reasons, only to stumble into something REALLY HORRIBLE - but Mark Grayson is a genuinely likeable character who always tries to do the right thing, with a vast range of goofy and powerful background characters.

It was a pleasant read, even with those insufferable book titles (They’re all eighties sitcoms! Hilarious!), but it was also easy to let it slip away as more and more books came out. I lost track after those first half dozen, but didn’t miss the comic that much. 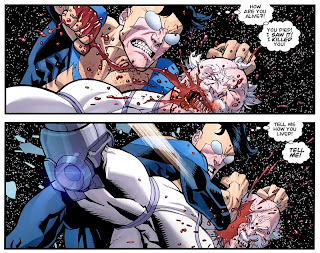 And then, at least two years after I last cracked open an Invincible book, I saw the fourteenth volume on the shelves of the library. It’s called The Viltrumite War, and I quickly realised it was the culmination of the main stroyline for Invincible, as everything finally comes to a head, in an all-or-nothing drive to finally rid the universe of the cruel and terrible Viltrumite race.

Even though I missed eight volumes of the story, it wasn’t hard to follow what was going on. There were new characters, and new alliances and all that, but it was easy to keep up with the general play. I’m sure there are all sorts of story bits I just wasn’t getting, but all the character dynamics were clear.

And it was incredibly satisfying. There really is a huge amount of resolution, some balls-out superhero action, lots of lovely little character beats, and one last little twist at the end. It delivered on the promises first raised in the earliest issues of the comics, as the story finally faces an inevitable oncoming storm. 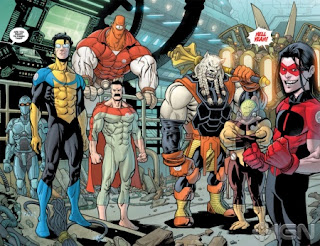 I’ve actually enjoyed Bill Willingham’s Fables comic more ever since it dealt with the whole evil empire, and moved on with life. The final battle against the Big Bad came and went, and new adventures and adversaries came along. It’s been accused of becoming a bit pointless, but my favourite stories are always a bit pointless and my affection for Fables has only grown over the past couple of years.

In a similar vein, I’m also glad that Invincible has not hung up his groovy goggles, just because he defeated the ultimate enemy, because the future is more unpredictable and uncertain, and that always generates good drama.

I’ll try not to let eight books worth of stories slip by before I check in again.
Posted by Bob Temuka at 7:14 PM