All-Star Western is apparently one of the genuine sales successes of DC’s new 52 initiative, almost tripling the sales of Jonah Hex, according to some figures. And it’s all been done without any real change in creative team - the same good writers and extraordinary artists who made the most recent Jonah Hex comic series so unexpectedly tasty carried on into the All-Star.

A lot of that sales bump is undoubtedly due to the decision to tie Jonah Hex in with the history of Batman’s home town, with mixed results on the creative side. The comic has lost the sharp and sweet impact of the short stories in Jonah Hex, in favour of “Look, it’s the Penguin’s grandfather!”, but even though the story isn’t as tight as it once was, it is still a ridiculously entertaining bit of DC pulp western fluff (with some stunning Ladronn covers.). 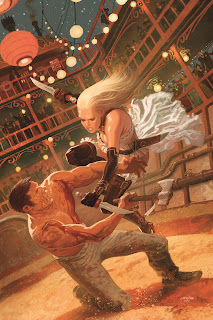 And while some of that Owl tie-in stuff to modern Batman stories gets a bit tedious as it drags on and on, the comic does maintain the value of the sharp short story, with a decent back-up story in each issue which is well worth the extra $1 the comic costs.

Each of these short stories has had some lovely art on them from the likes of Phil Winslade and Jordi Bernet, but #10 has something special, with the legendary José Luis García-López showing up to do a Bat Lash story.

Seeing this splash page in my Saturday comics was a suddenly wonderful experience: 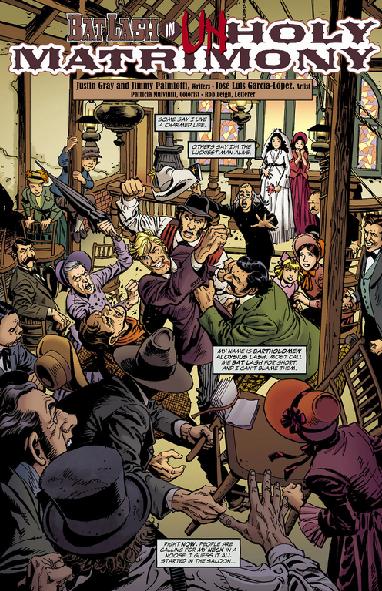 Look at the grin on Bat Lash’s mug! Or the way he’s swinging that pacifist fist! Or the guy in the darkened foreground, ready to bring a chair into the proceedings! José Luis García-López art is always welcome in this Tearoom, and the man has as much storytelling energy as he ever did.

García-López has been doing this for a long time now, and his obvious professionalism is all over that page. A splash in a short story is an extravagance, but there is tonnes of detail to pick apart in that one image, and the pregnant bride at the altar suggests all sorts of nefarious doings, while the fist-flying action gets the story rolling with a bang.

There is another seven pages of beautiful women, and bloodied fists, and lucky escapes. It’s prime García-López art, which isn’t surprising, because he’s been in the prime of his career since the early seventies. 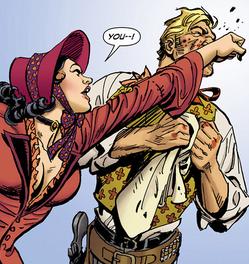 I keep thinking García-López has retired (he’s well into his sixties by now), but he just keeps popping up here and there, and I realised he was always just popping up. Here and there.

There were a handful of powerful Batman comics, (including the brilliant Batman/Hulk crossover, with wonderful art that blew the lid off my eight-year-old head), and his Superman always has a real grace and power. Even though he was never on one title long enough to be remembered for a definitive run, he literally set the guide for DC superhero art for decades.

In the past twenty years, it’s been possible to find his art in things like Batman Confidential, a Deadman mini-series, random issues of Hawkman or The Spirit, a JLA Classified story, odd Elseworld books and Wednesday Comics. It’s never easy to predict where he might show up next, but his work is always so recognisable, and always so welcome.

While there is a lack of a definitive run that leaves the feeling that García-López has never really been appreciated, he has crafted a career of random precision that remains rewarding. 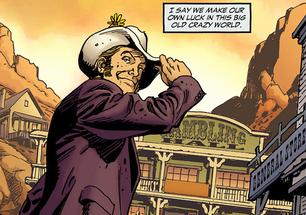 I was genuinely surprised by how much I ended up liking the most recent Jonah Hex comic. I was not a fan of Palmiotti and Gray’s superhero work in any way, but I ended up enjoying the series because of their sharp nature. Invariably done in one, with some kind of point, or some kind of showcase for somebody’s spectacular art, I was eventually hooked, two or three years into the run.

All Star Western is slightly disappointing, because I did love the way the previous series got straight to the point, and then ended, and that was that. But there are still great moments in the larger story – the journey into Gotham’s underground caves got completely mental, and the interaction between Tallulah and poor Doc Arkham in #10 is funny as hell – that keep the adventures of Jonah Hex fresh an interesting.

And the more chances to get a great artist like García-López on a great character like Bat Lash, the better.
Posted by Bob Temuka at 3:28 PM