As well as being a thoroughly good bloke who lets people from the South Island borrow his Hate comics, pal Nik also has a standing subscription to Back Issue magazine, the TwoMorrows publication with a boner for Bronze Age frivolities, and he lent me a dozen of them, as well as all that Bagge goodness.

I got through the Hate annuals in less than an hour, but I’m still churning through the Back Issues a week later, because they’re so dense and rich, and it's taking me so long, even though they’re all I want to read at the moment. I was halfway through reading Simon and Burns’ The Corner, but that scintillating examination of the broken shards of the American Dream will have to wait a while, because I‘m more interested in finding out the secret history of the Dazzler.

I barely want to go to work, or leave the house, or read anything else. All I want to do is sit on the sofa and read Back Issues. 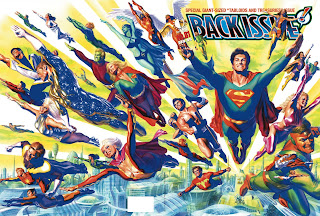 Of course, I’m the right age – 37 and a half, which puts my formative comic years firmly in the era of Infantino and Shooter, and Goodwin and Levitz. I have a deep and unshakable affection for the way Jim Aparo draws eyebrows, and John Byrne’s fantastically cute Franklin Richards, and those horrible Plop! covers, and the streetkid angst of Fallen Angels, and Dick Dillan’s endless professionalism, and Cockrum and Grell’s Legion costumes, and I can find something on all of that in one single issue of Back Issue.

Back Issue reminds me that I’m far from alone in this fondness for comics gone by, while also reminding me that there are a shitload of comics and characters out there that I still know nothing about. Even though the magazine limits itself to comics from the seventies and eighties (and lately the early nineties), that is still a lot of territory to cover, and a lot of digging that can be done. 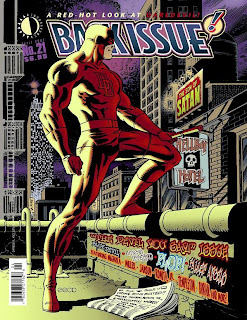 The magazine is now up to issue number fifty-something, and there have now been dozens and dozens of fascinating articles and stories about comics I’ve never read, or the hidden backstories of old favourites. Some of it has been well covered, and stories become cliché: Things like Byrne’s ultimate idea of Wolverine - that he is somebody who could brutally kill Kitty in between mouthfuls of cornflakes - keep getting trotted out.

But there is still a tonne of new material generated about old favourites. Even subjects which were heavily covered in the past are worth reading, with years of hindsight producing keen insights. It’s also divorced from the hype of the now – so much new material on current news sites such as CBR or Newsarama is worthless PR pap, and even interviews with entertaining voices such as Moore or Morrison are just full of more regrettable shilling, and not enough hindsight. 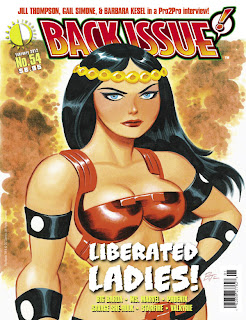 It can be a bit too enthusiastic, and there are declarative statements that leave a bad taste, and a lot of the interviews get a little too fawning, and there is a bit too much “And then in the next issue Nova fought the Mandarin and then he got in a fight with his parents and then he fought The Living Monolith”.

But editor Michael Eury maintains a good mix of material in each issue, and I might not like reading the interviews about some actor who was the voice of somebody in some early-morning cartoon from the seventies, but that's okay, because I am interested in the battle armour and exposed brains from the Luthor/Brainiac revamps in the early eighties.

It's also a beautiful product, with great art choices – the randomness of the pencil art collections that pad out each issue are always a delight, there are frequently beautiful comic covers and sketches, and just the right mix of text and art in the magazine itself to make each issue thoroughly readable. 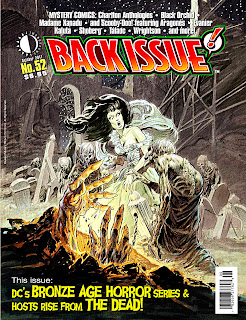 And any passionate enthusiasm for art and story is always welcome. The magazine still has the odd dose of snark, but it positively glowing in its praise for old comics, and that kind of happiness is infectious. The articles can sometimes get a bit bitter, with justifiably pissed off creators grabbing the chance to settle some scores, and sometimes it can all get a bit melancholic, with lost opportunities and old regrets.

But it's still largely a positive experience, and one I'm addicted to at the moment. I could go for a walk in the sun this afternoon, but I'd rather stay inside and find out whatever happened to Steve Skeates.
Posted by Bob Temuka at 7:41 PM

Great post, I'll have to loan you stuff more often! I do agree BI is a pretty positive zine and could sometimes use a bit more bite but I'm pretty happy with it; these nostalgia mags seem the last one standing in the field of comics journalism and are worth supporting...