It all got so silly so quickly: Ambush Bug in DC Comics Presents

I always think I’ve got all the Ambush Bug comics DC ever published - and it’s taken me years to get this far – but there always seems to be more. I’ve got all the mini series and all of the one-offs, but I keep stumbling across issues of Action Comics or Supergirl where the green fool literally pops in and out, and I have to get them, because I always enjoy Ambush Bug comics, just a little too much.

The most recent Ambush Bug finds were a couple of issues of DC Comics Presents, including the Bug’s first appearance. And even though these are undoubtedly clumsy and more than a little silly, and even though these comics are now nearly 30 years old, they’re still pretty bloody funny. 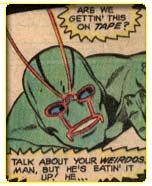 Ambush Bug would become synonymous with insane metatextual fun, but that’s almost totally missing in his first appearance in DCP #52. It a regular old 1982 DC comic, with an old and tired pre-Crisis Superman smashing into the missed opportunities that were the New Doom Patrol. It’s still Giffen’s creation, but with a script by good ol’ Paul Kupperberg, it’s missing that spark of the complete bonkers.

Here, Ambush Bug is a fairly goofy villain who even straight-up murders someone, and Giffen’s art as stiflingly slick as it ever got, (before he broke it all down again), but there is also  a nice little joke involving the word “Blooie!” and a surprise guest appearance by Judge Dredd (as a burst balloon), so it’s not totally worthless. First appearances aren’t always magical. Twenty-nine issues later, and the Bug was just about ready for prime time with his own series, and showed up again in DCP #81. It’s the same character, but could not be more different.

The classic Bug team of Giffen, dialogue man Robert Loren Fleming and inker Bob Oskner were in place for the issue, and this last appearance with Supermen gave a good idea of the increasingly ludicrous direction Ambush Bug was rolling in.

It features Superman and Ambush Bug swapping minds, with the powerfully irresponsible Bug interfering with the plans of Kobra, the terribly serious master villain (the straight men in Ambush Bug stories were often the villains). It could be any typical DC plot from any time in the past 70 years, but is given life by going straight for the funny bone.

Serious superhero fans like serious superhero stories, and frown upon any straight superheroics that show too much parody or satire, but superheroes can also get way too self-important, and the rare doses of humour in the DC and Marvel universes are always welcome.

After all, there are plenty of Superman stories about JUSTICE and HONOUR and NOT BEING A DICK, it’s all right to have the odd comic like DCP #81, which has a Superman with a Bug’s mind uncontrollably running around and around the globe, waving his arms in the air in panic, or the real deal having to convince his robots that he really is Supes. 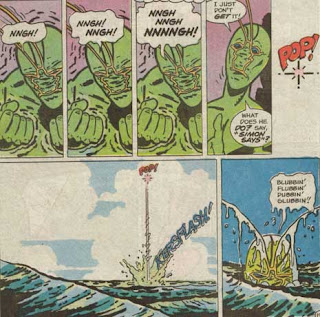 So issue number 52 of DC Comics Presents was fascinating from a historical viewpoint, and number 81 was just goofy enough to still gets some laughs, but it’s also fascinating to see how much the character (and Giffen) grew in between those two issues.

As the art grows chunkier and livelier, and Giffen starts doing strange things within the rigidity of a square panel, Ambush Bug grows from slightly goofy villain to outright lunatic, breaking out of the strict rules of a superhero universe, and using the position of the Fool to point out all the craziness.

This invariably pisses off all the right people, and after this brief burst of Bug madness in the eightioes, he has only made sporadic returns, in the wonderful Nothing Special and the frankly bizarre Year None, before disappearing into limbo again. We all get the Ambush Bug we deserve, but we don't get enough of him..
Posted by Bob Temuka at 10:43 PM

Bob, a couple of more titles you should try and track down if given the opportunity from the same period in Giffen's career:

The first is The Legion Of Substitute Superheroes Special-- while it features a script from then current Legion of Superheroes writer Paul Levitz, it's very much in the style of Ambush Bug. After all, any comic that features a hero named Stone Boy whose super power is to turn into inanimate, er, stone, can't be bad.

The second, and far far harder to find, is a one off black and white comic called the March Hair. This is written by Robert Loren Fleming and features the adventures of a hitman and how his life is hindered by a six foot tall invisible rabbit. It's essentially the film Harvey rewritten with the titular character being played by Bugs Bunny. And guns.

Both don't quite reach the heights of Ambush Bug (a series, like you, I've managed to track down almost every Giffen related appearance of-- I presume you have the issue of 52 where the Bug joined the JLA?) but are well worth reading.

Thanks for the suggestions, Carey. I've already got (and love) the Legion Of Substitute Superheroes book, but I'd never even heard of the March Hair, even though that sounds right up my street. It might prove impossible to find, but it's certainly something to look for.

And yeah, I have got that one issue of 52, because I really am that sad.